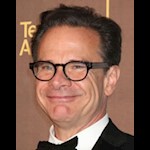 Peter Scolari
Peter Scolari was best known for his roles as Michael Harris on Newhart, for which he received three Emmy nominations, and Henry Desmond in Bosom Buddies. He won the Primetime Emmy Award for Outstanding Guest Actor in a Comedy Series for his recurring role as Tad Horvath on Girls. On Broadway, Scolari has appeared in Wicked, Sly Fox, Hairspray, and Lucky Guy, which reunited him with his Bosom Buddies co-star Tom Hanks. Scolari also appeared Off Broadway in Old Man Joseph and His Family, The Exonerated, In the Wings, The Music Man, and White's Lies. We remember his lasting legacy and impact on American Theatre. Peter, you will be missed.

Click the image below to see Peter's video about Buster Keaton.