Donna Inglima, director of youth theater, education and outreach for The Laguna Playhouse, will tell you that the fundamental ethos of theater has remained unchanged since its beginnings thousands of years ago. Plays and musicals offer a window into psychology, language and communication, providing audiences with a glimpse of the human condition in a live reenactment.

Donna also notes that to expose young people to the experience that theater offers is nothing short of a gift. It’s one of the many reasons why The Laguna Playhouse Youth Theatre, under Donna’s leadership, offers such robust opportunities for elementary and middle school students to study theater in a professional setting, and through myriad hands-on learning experiences. For young people, the benefits of these programs reach far beyond the stage. 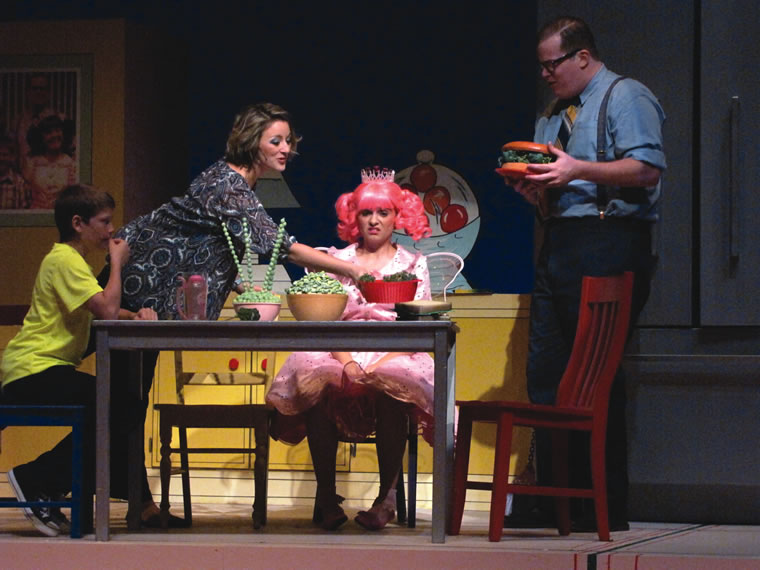 In the youth theater production “Pinkalicious The Musical,” the lead character catches “pinkititis” and turns pink from head to toe.

BUILDING A BACKDROP
The playhouse has offered programming for children and teens from its earliest days, dating back to the 1920s when it was founded in Laguna. It wasn’t until the 1980s, however, that the playhouse formalized its commitment to adolescent audiences; thus, its youth theater program was born. In 1998, under former Executive Director Richard Stein’s leadership, Donna joined former youth theater director Joe Lauderdale. The two were tasked with expanding the offerings, which, at the time, included only one or two classes for aspiring actors.

What the playhouse did have in those early days, however, was a nonprofessional theater outreach arm. Today, it’s known as TheatreReach and brings live stage adaptations of books included in K-6 curriculum in schools throughout Orange County and beyond, creating unique learning opportunities. One of the first performances that Donna and Joe created in the late 1990s was a stage adaptation of “By the Great Horn Spoon!” based on the book by Sid Fleischman. That production is still touring today, and the program has since created other adaptations from classic young adult books. 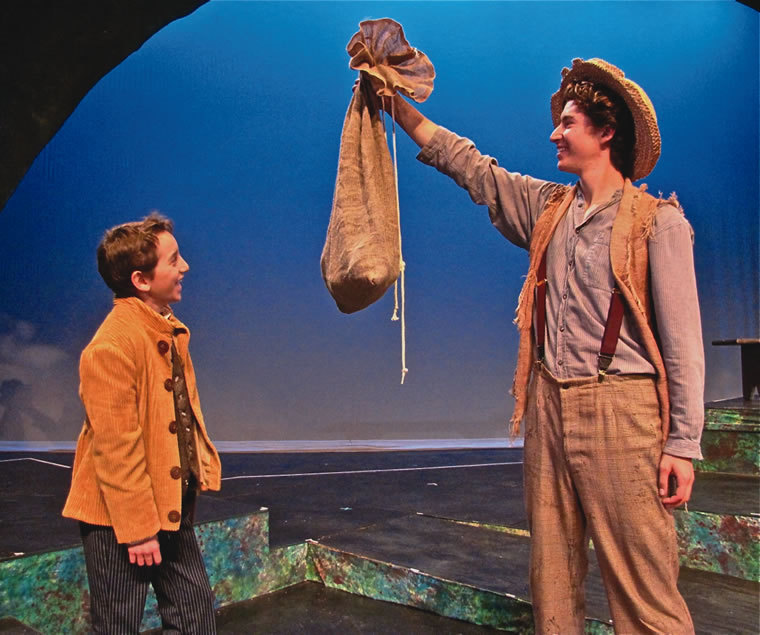 The spring 2015 season included “The Adventures of Tom Sawyer.”

IN THE SPOTLIGHT
Though the playhouse has since downsized its TheatreReach performance offerings to focus on in-house productions, it has remained true to one philosophy: Bringing books to life is crucial to a successful youth theater program. “The program today is still very much literature-based,” explains Donna, who recently wrapped the spring production of “The Adventures of Tom Sawyer,” based on the novel by Mark Twain.

By selecting literature as the basis for most of its productions, the playhouse provides young audiences with an elevated intellectual and emotional experience. “The characters always have problems; there’s always a conflict,” Donna says. “In ‘Tom Sawyer’ you’re examining questions of morals and ethics that can come to us at any age, so however old a child is, he or she can understand on their own level what it is that is being examined or discovered by the characters.”

Watching characters work through problems on stage isn’t merely a passive activity for young audience members, however. Theater also has the power to influence. “Young people are always looking up, for role models, for some kind of understanding of who they are as a person and in the world, and what they see when they see a production are live people with whom they can identify more closely,” Donna explains, adding that the impact is even greater if the actors playing those characters are young people. 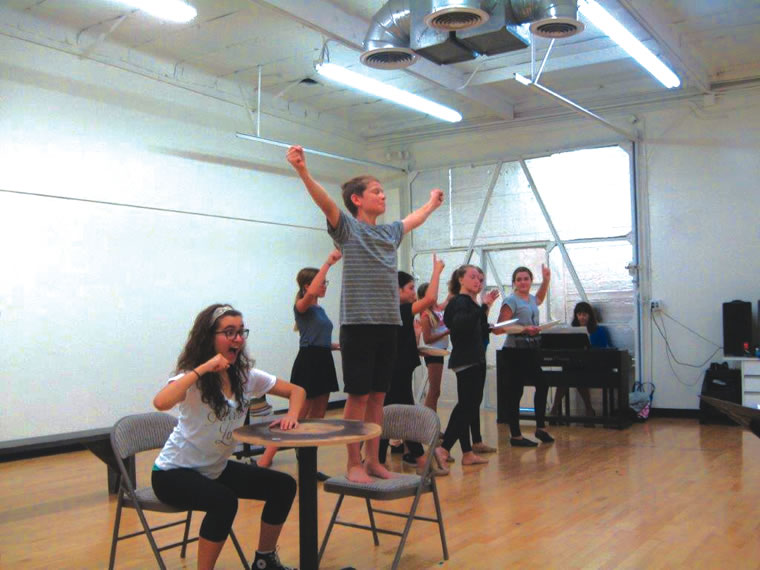 THE GREATER GOOD
For those who want to play a more active role, the playhouse has classes and workshops throughout the year, open to ages 4 to 14. Offerings include The Magic Suitcase, a theme-based improvisation class for ages 4 to 6, and the musical theater workshop for ages 9 to 14. While students are sure to acquire acting skills, they’ll undoubtedly learn much more than that.

“Theater is the best training for life because of what it teaches: discipline, relationship-building, timing, imagination, how to be in the now and also how to reflect,” Donna says.

Theater also has the power to foster confidence and self-esteem. “The playhouse is a really safe environment, where you can say things you might not say around your friends at school,” says Izzy Saunders, an 11-year-old program participant. “You can really be yourself here and it’s OK because you’re supported.”

“THEATER IS THE BEST TRAINING FOR LIFE BECAUSE OF WHAT IT TEACHES: DISCIPLINE, RELATIONSHIP-BUILDING, TIMING, IMAGINATION, HOW TO BE IN THE NOW AND ALSO HOW TO REFLECT.” -DONNA INGLIMA

Donna recalls a 10-year-old participant who, several years ago, also came to benefit from the program’s culture. At first he was prone to having tantrums and outbursts and refused to participate in the program, but then theater became a growth opportunity.

“We selected one scene in particular for him where he was a bear, and for some reason, he attached to that character, and suddenly he was able to follow direction and his classmates loved what he was doing, and he felt pride and success in that,” she says, adding that he remained enrolled in the program until he turned 18.

She also remembers a young student who was extremely disappointed when she was cast as a flower and not a lead. Donna had the opportunity that season to demonstrate that every role on stage is vital to the success of a production. “She learned a lesson, like many kids, about taking a step back and understanding that it’s not about you; it’s planting that seed that they are a part of something that’s so much bigger than themselves, that they’re contributing, but it’s not their show,” Donna explains. 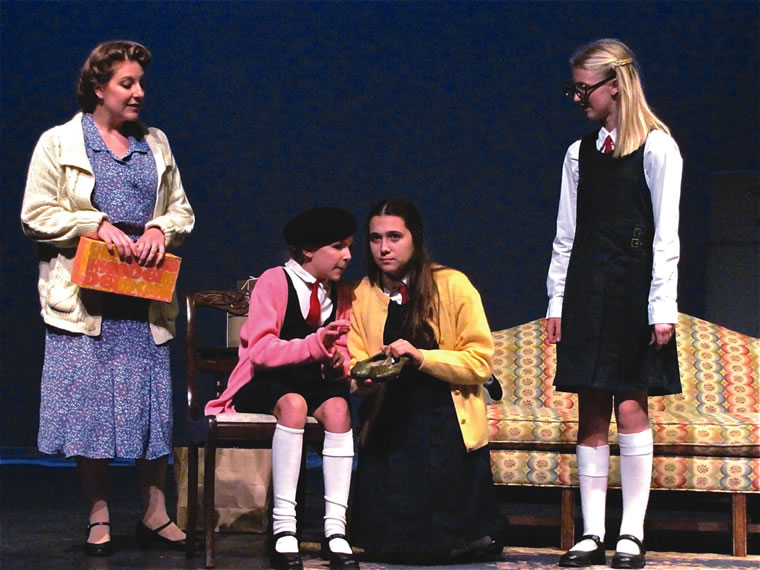 ABOVE AND BEYOND
Truly devoted thespians can elevate the experience by auditioning for The Laguna Playhouse Youth Conservatory. A small-enrollment, high-level program, the conservatory offers intensive weekly instruction in acting, production and dramatic literature. Students must be at least 10 years old to take part in the selective program, which requires a significant time commitment from families.

“Between school and theater, I recall what were often 40-hour weeks, and I didn’t really understand it until I saw how much she’d grown,” recalls Annee Della Donna, a Laguna resident whose daughter (Eliana Alcouloumre) participated in the conservatory program for seven years. “But we have Donna to thank for Eliana’s incredible work ethic. She had the best grades when she was enrolled in youth theater, because Donna wanted students to be their best selves, and that included getting good grades.” Eliana is now a student at USC’s School of Cinematic Arts.

In addition to working on general youth productions, conservatory students also serve as the technical staff and often the cast for The Laguna Beach Playhouse Theatre for a New Generation; this program offers an annual production for teenagers that explores more mature topics such as school violence, eating disorders, bullying and complex historical matters. After each performance, a panel of experts is brought on stage to talk with teens and their families—in this past winter’s production of “Number the Stars,” for example, Holocaust survivors discussed their experiences.

Conservatory participants are responsible for at least two plays annually, working and training alongside industry professionals. There is open casting for every production, and roles alternate throughout the year, which means that students are frequently assigned non-acting positions. These duties may include anything from lighting and sound operation to stage management and props construction, translating into a comprehensive educational experience.

“We learn a lot here. I don’t think you can learn without the right environment,” says 12-year-old Trevor Yusi, who played the titular role in “The Adventures of Tom Sawyer” this past spring. “Here, at the playhouse, we can pick up every single drop of learning that there is to know about theater.”

Whether kids and teens are interested in trying their hand at an acting class, auditioning for a musical, or simply taking in one of the program’s annual productions, the playhouse has created a space for everyone to engage with theater—which is, after all, what it’s all about.

“I continue to believe that we’re one of the best-kept secrets in Orange County,” Donna says. “… There are great opportunities here for young people to grow, to learn about theater and to become parts of who they will be, to step forward into themselves, and it’s an incredible atmosphere for that to happen.”